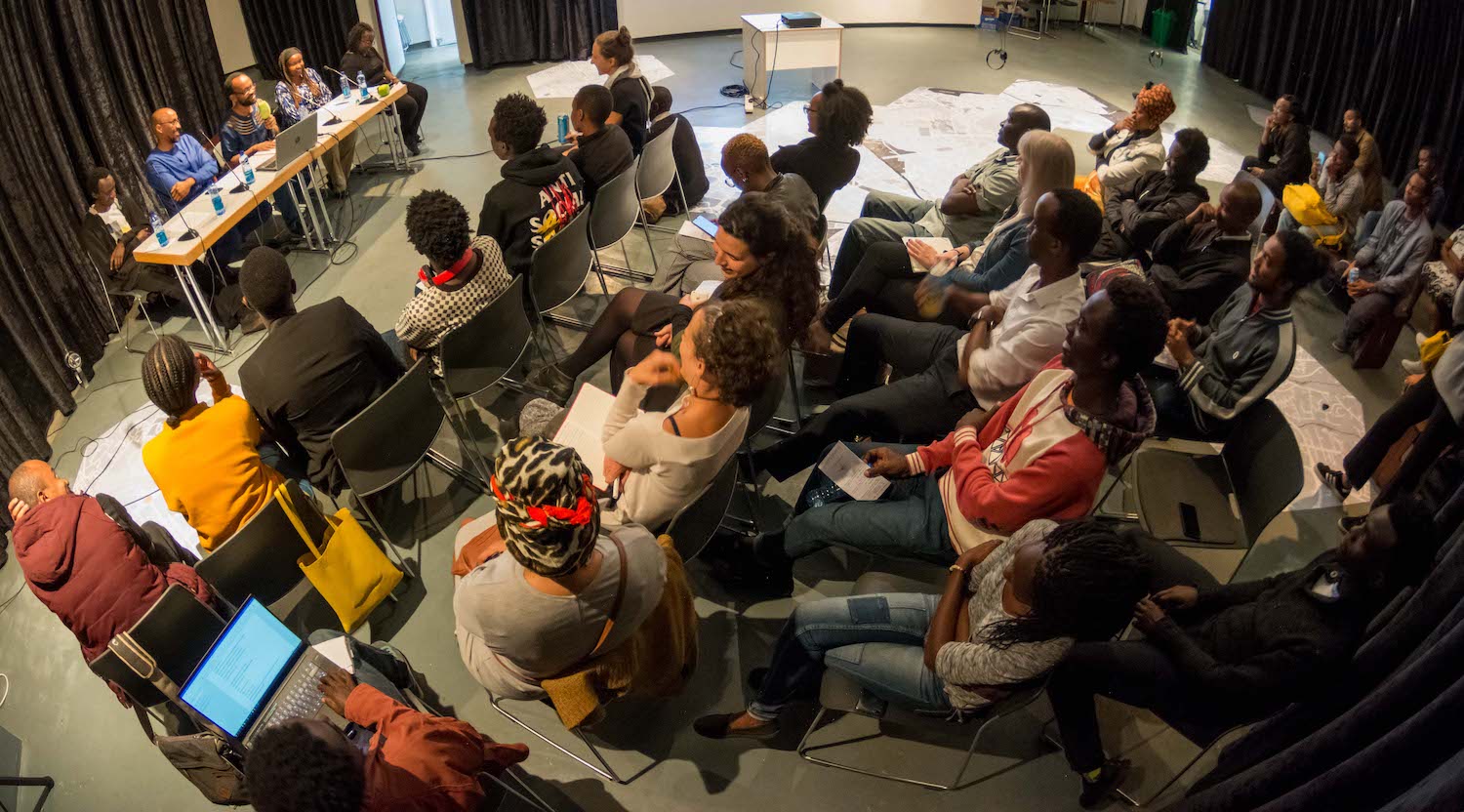 Notes from the LISTEN! Exhibition – Sound and the City panel discussion (2019)

This text tries to circumnavigate and map conversations of individuals working through and along sound in different fields: architecture, bio-acoustics, and sound art. The notes follow an autonomous transcribing and not-always-reliable memory.
It is also an exercise on listening and botting. –a continuous participle for bot – algorithmic poetics – also a form of lucid / robotic writing

The moderator, Lorna Ng’eno, settles the auditorium and begins with introductions. Good evening everyone – welcome to Sound and the City, today’s open discussion as part of SOUND OF NAIROBI’s ongoing LISTEN! exhibition.

More glitches continue to be heard leading to mics getting cancelled.
Stella Mutegi then continues to introduce Karanja Kabage without the mics.

Building a structure constructed with sound in mind – we do not think about sound unless in auditoriums, cathedrals – we (not Cave_Bureau but generally) never think about sound when we do the design.
Architects ignore sound in built environments, what you have built, how it affects sound­.

Karanja
Karanja is a founder + director of Cave_Bureau, a Nairobi based bureau of architects and researchers charting explorations into nature-within-architecture/urbanism.

He is a natural environment enthusiast leading geological and anthropological investigations into architecture and nature. Echoes. He leads the research, orchestrating expeditions and surveys into caves within the great Rift Valley, navigating a return to the limitless curiosity of our early ancestors.1

On the white wall, a projection of the Cave_Bureau manifesto film by 8278A rolls on.
The manifesto states that architecture started in a cave.

In the projection, an aerial picture of Nairobi in 1900
If you imagine the sound of city at that time – when you compare to what we have today
louis khan – to hear sound is to see its space
light leading to a musical approach
how do we imagine public space? – Kamukunji analysis

(mic sound is back)

An MP from Nairobi, a fly whisk –
Jeevanjee is fenced off
If you destroy the fences and the green spills at the streets – you could allow more of these activities to thrive

The second project – the Anthropocene project – exhibited at a New York museum
Geological society – humanity impacting earth’s system to where it’s not impossible to change
What’s a museum in the future of anthropocene?
The Anthropocene museum as a project to think about space
On the projection, the emissions chart looks like a wave that ascends to – destruction
A quote on technology. Martin h.

A film – a Maumau veteran, in Suswa – an exhibition, a conversion in the cave, acoustics,
Geothermal energy in Suswa,
Kenya 50% geothermal
Fibonacci numbers in structuring the cave with kilimani bamboo sticks in Suswa
Baboon parliament in Suswa equated to a rome pantheon
The Paradise Lost (Kiambu) cave – small and intimate, not too many echoes
Laser technology to scan the caves – used to programme caves

Karanja: NEMA – measuring sound – deals with comfort
Part of nature – we
Sound needs to be part of that discourse
Buildings as devices that create sound
Wangari Maathai – unbound (sound) trumbling experience of walking a clean surface
Our pavements influence reverbs

A leather cloth on classical guitar strings – sounds like train
Kwi heho i tukurara ku? – It’s cold, where do we sleep?
Hyrax
My mom’s voice

Ciira wa Maina
Ciira wa Maina is a senior lecturer at Dedan Kimathi University of Technology and a researcher in bioacoustics. His bioacoustics research projects aims to use audio recordings obtained in Mt. Kenya ecosystem to perform biodiversity assessment and relates to indicator species2

– bio acoustics to track ecology
Listening to our mountains
Nyeri –
Acoustic data in Mt Kenya
Tegeri river
You can drink this water
It is very cold and nice
Monitoring ecosystems like this – they take surveys, they can’t monitor everywhere
You can actually hear a lot of animals
Indicators – birds vocalize when things go wrong in the environment
The birds you used to hear – you don’t hear them anymore
Mt Kenya National Park – recordings of birds
Hartlaub’s Turaco – Ngugu
can we hear it again?
It’s really a beautiful bird, when it opens its wings it’s this beautiful bird talking to another or whatever they are doing
People breaking the stones – quarry – human interference
Ancestral naming of things – ngugu
Individual relationship – they lose their identity
Tropical boubou – ngerekeri
– A duet
– Ngerekeri means to copy – echo/loop

KMRU
A producer, dj sometimes
Working with field recordings and sound
Showcased in Nigeria
How we listen
An archive of samples in my production
Variations 2019/2020- A sound installation in Abuja. Three-channels field recordings/experimental sound, loudspeaker system. Berlin, St Petersburg, Nairobi
Listening and remembering
My ears are like favorite parts of the body
Deaf people perceiving sound

He plays from his soundcloud page
Track – B1 (Nairobi)
– As you can hear – digital sounds – field recordings
– A bell 6 am – sad when they changed
– My compositions – location inspires what to create – you are going to experience the sound is not yourself – your own world of soundscapes
– I really love sounds
– For people to appreciate – collecting sounds – creators – tools e.g .making a film, scoring, archive, you can find – so much sound you can use – i’m happy that this is happening in Nairobi