Today’s episode is on recording techniques. This is a very complex and wide field and there are thousands of blogs and tutorials online about how to record which sound and what equipment is best, what the best tricks are etc. So the best advise is: Have a look online about specifically what you want to know. The end.

Just kidding! Needless to say, there are specialists out there who know much more, but none the less I would like to speak today about the recording technique and equipment applied when SON recordists go out on recording sessions through the city, like for the City Walks workshop or the Sounds Like A Pandemic? project.
I will also propose an app for your phone which has some awesome features for recording and sharing great audio.

Most of the recordings on the archive are sourced from sound walks which have been organized by the SOUND OF NAIROBI team. For these exercises we use a special kind of microphone: the binaural microphone.

In our case we use the Soundman OKM II Microphone.
It looks like this: 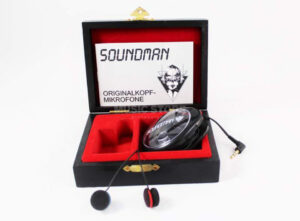 And you use it like this (per instruction manual): 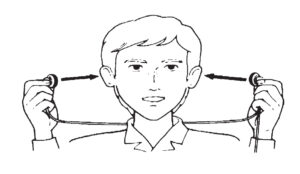 The microphone consists of two small mono microphones which you wear in your ear facing outwards. This is great as they are fairly invisible, they really just look like common earphones. And that is important in an environment like Nairobi, where you do not necessarily want to stick out by wearing gear.

The uniqueness about this recording technique is that because you wear the mics in your ears it captures sounds in a similar way as to how ears perceive sound waves. The recordings thus give a very realistic feel of what the person heard when they did the recording. It specifically registers the direction of where sounds happen and come from in a very accurate way. I find it is best understandable if we have a simple look at the physicality’s of how we hear direction:

Position of the Ears
Humans ears are designed to be omnidirectional but because the ears are located on opposite sides of the head, the sounds heard by either ear will vary in timing, volume, and frequency balance. These differences are the clues the brain uses to decode a sound’s location.

Timing
If a sound comes from the right it hits our right ear first before it hits the left.
Coming directly from the front both ears are hit at the same time.

Frequency
When a sounds comes from the left, for example, your head blocks a portion of it from reaching your right ear. But it doesn’t block all frequencies equally. High frequencies have less energy, are more easily absorbed by obstructions than low frequencies. So with the sound, your right ear will get MORE of the low end, and LESS of the high end.

So by wearing the microphones in your ear the recording reflect exactly this situation. Another thing about it is that it also reflects the individual doing the recording. You hear as much of the person in the recording as of the surrounding. If the person has a small head it sounds different from one with a big head. A tall person’s recording sounds different compared to a shorter person’s. Because you wear the microphone so close to your body it registers the bodily sounds of every recordist: The footsteps, the movement of arms while walking etc.

Hear here, an unidentified person doing a field recording while having a cup of tea 😉

This leads us to some interesting philosophical ideas about SOUND OF NAIROBI as an archive. The archive is a collection of subjective and individual sound experiences. This subjective ear is an integral part of the archive. The archive does not want to create the illusion of an objective collection of sound, which then become history. It rather reflects and validates the many different people with their uniquenesses that contribute to this archive. Because actually that is, what I think history is about. It is not one universally fixed story; it is many, many different threads sometimes woven together but also knotted and tangled… what do you think?

With this recordings there is one thing which is not to be confused, though. The microphone only records sound waves. The way each person perceives them is a very unique experience, you have your own memories, your own ideas. Some sounds for you stick out because you know them, some draw back because you find them not important.
I sometimes find myself listening back to a recording and thinking this is not what I experienced. I think, where is the sound of that bird I heard. In the end I can detect it in the very background of all the other sounds in the recording. The ability to select certain sounds and blend out others is is commonly described as the cocktail party effect. I guess this keeps us sane to some extent 😉

That much about binaural techniques: If you are in Nairobi and want to try the mics, get in touch ([email protected]) and we arrange an introduction session.

We would like to loudly remind you that the archive is also open to other recording techniques. You can for example use your phone and then upload the recording directly to the website. Most phones have a native recording app (mostly called Voice Recorder or Voice Memos) which will work. For those of you who want more control and are up for experimenting a bit, Voice Record Pro is an app which gives you control over the recording format and attributes such as gain (volume of signal entering the phone) and much more. I found it very useful and fun to play around with. It is free to download for IOS and Android. Check it out! And then upload your sounds here 🙂